Women, Money and me — by ex-billionaire Donald Trump 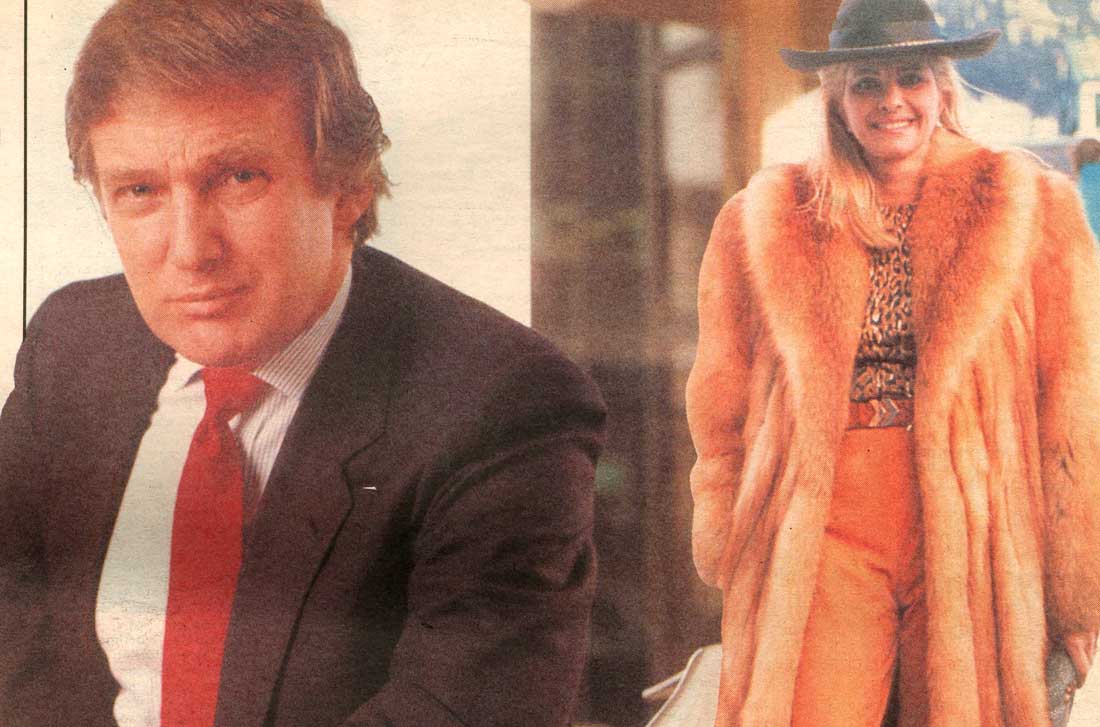 As the door of the Vanderbilt suite flew open, a tall, conservatively dressed man with floppy hair strode across acres of deep, opulent carpet with a hand outstretched. Behind him, holding the door open, stood an aide with a telephone clamped to his ear.

“Mr Trump has arrived,” whispered the aide into the phone. Yes, Donald had arrived all right. He had flown straight in from his Atlantic City Taj Mahal casino hotel complex, the one he had completed renovating at the cost of £213 million.

And now he was on the fifth floor of his Fifth Avenue hotel, the legendary Plaza that had bought at the bargain price of £240 million.

“Hi, there,” said Donald settling himself into an exquisite little satin covered sofa. “Isn’t this fun? I don’t usually give interviews. In fact, I haven’t spoken about myself at all since the divorce news and all the coverage on my financial troubles.”

On the marble table front of us lay a selection of magazines. Ivana’s newly-constructed face, the result of extensive plastic surgery, smiled up at us from  the cover of American Vogue. Donald ignored the cover. Perhaps he remembered Ivana’s resolution: “I never intend to look a day over 28, but it is going to cost Donald a lot of money.”

“What are they saying about me in Britain?” asked the flash-brash King of Glitz. I said: “They are saying you are having a relationship with, Sarah Brightman, Donald.”

“What?” said Donald, with a look that can only be described as delight. But I’ve only passed her on the corridors of the Trump Tower building where she and Andrew Lloyd Webber have an apartment. “I hardly know the woman. Can you write that down? And say that I think they are both wonderful, talented people and that I wish them the very best.

“What else are they saying about me? Do they write about me more than Ivana? Tell me, when Ivana went to London, did she go to Wimbledon? Did you see any photographs of her there?  Did she get into Ascot? Who do they treat the best in the Press over there? Me or her? I suppose they feel kinda sorry for Ivana.”

The questions are asked in a soft, almost shy voice and from lips shaped like a perfect Cupid’s bow. The macho brusqueness you associate with self-made billionaires is not apparent. When he’s told that wives who are left for nubile playmates like Marla Maples usually earn a certain sympathy he looks worried

“But I’m not dumping Ivana for another woman,” he said. “I’m not marrying anyone else. That’s not why I’m dumping her. It’s one of those things. People grow apart. Life changes and you can’t always control the changes.

“I guess I’m different from other, successful men in that I’m only 44 with a lot of the physical attributes older rich guys don’t have. So, a lot of women do come after me.  It’s flattering and I’m not complaining. Women do seem fascinated by men who are rich and powerful. Men like me, I guess.

“I’m used to female attention, but it can never compensate for a good marriage. Believe me, a good marriage is a perfect state to be in. I really believe that.” If that is the case, why doesn’t he return, to Ivana?

He smiled, wriggling helplessly on the satin sofa. “What? Me go back to Ivana. Life isn’t like that. That is not the scenario in this situation.”

Donald, who appears fascinated by other celebrity marriages’ break-ups, asked about the Lloyd Webber marriage and Rod Stewart’s divorce. “Did they have a prenuptial agreement? Did Rod have to pay out much? I had a pre-nuptial agreement with Ivana and that’s what is taking up a lot of my attention at this moment in time.”

I’ll bet it is. Donald is prepared to offer Ivana custody of their three children well as their 45-roomed £2.1 million Connecticut mansion and £14.7 million. A friend of Ivana’s scoffed: “She can’t even do her nails with that.”

Quite so. All Ivana is asking for is a living wage about £88 million with the Trump Plaza thrown in. Not a lot when you consider that she is reported to spend over £764,000 a year on clothes alone. No wonder The Donald, as Ivana calls him, looks worried.

“No, no, I never worry really” he said gloomily. “I sleep for four hours a night, the same as I always have. I’m the sort of guy who takes chances in life. I always tread water.”

What about daily reports claiming his empire is crumbling, that he borrowed too much and now crippling interest rates are destroying him? The Donald is supposed to be £17 billion in debt. He even failed to make the Forbes list of the World’s 271 richest men. His £1 billion fortune has dwindled to less than half a billion. Peanuts!

“Ha, ha, ha. Do I look like a man in trouble? Is a man who owns this Colossus, this Plaza Hotel, in trouble huh? Sure, interest rates are crippling. They are crippling everyone. But give me six months and I’ll show them. Unlike some people, I’ll pay my debts, and I’ll bounce back. Owing millions is no different from owing thousands on a house. Same worries, same problems.”

Donald was born into millions. Modest millions. His father, Fred, a real estate developer recognised the boy’s, early genius when he saw how his son enjoyed gluing toy blocks into giant skyscrapers. Since the mid-Seventies Donald has become one of New York’s most grandiose high-rolling building developers.

The gold-faced Trump Tower, the star of his empire, is the dearest concrete structure in Manhattan. His name is emblazoned across the city’s status symbols which he collects like toys: Trump Plaza, Trump Parc, Trump Palace, Trump Castle, Trump Princess yacht, Trump  Shuttle Airlines. How did he do it?

“I understand what the public want and I give it to them,” he said simply, as though he himself is unable to comprehend the enormity of it all.

For example, how does it feel to stand outside the magnificent Plaza Hotel and realise that it is all yours? Thrilling? Awe-inspiring? How does it feel Donald?

“It feels good,” he shrugged. “Yes, I must admit it does feel rather good. My life,” he said, gazing up at the giant chandelier “is like a soap. That’s how you can describe everything that has happened to me. A major soap.” 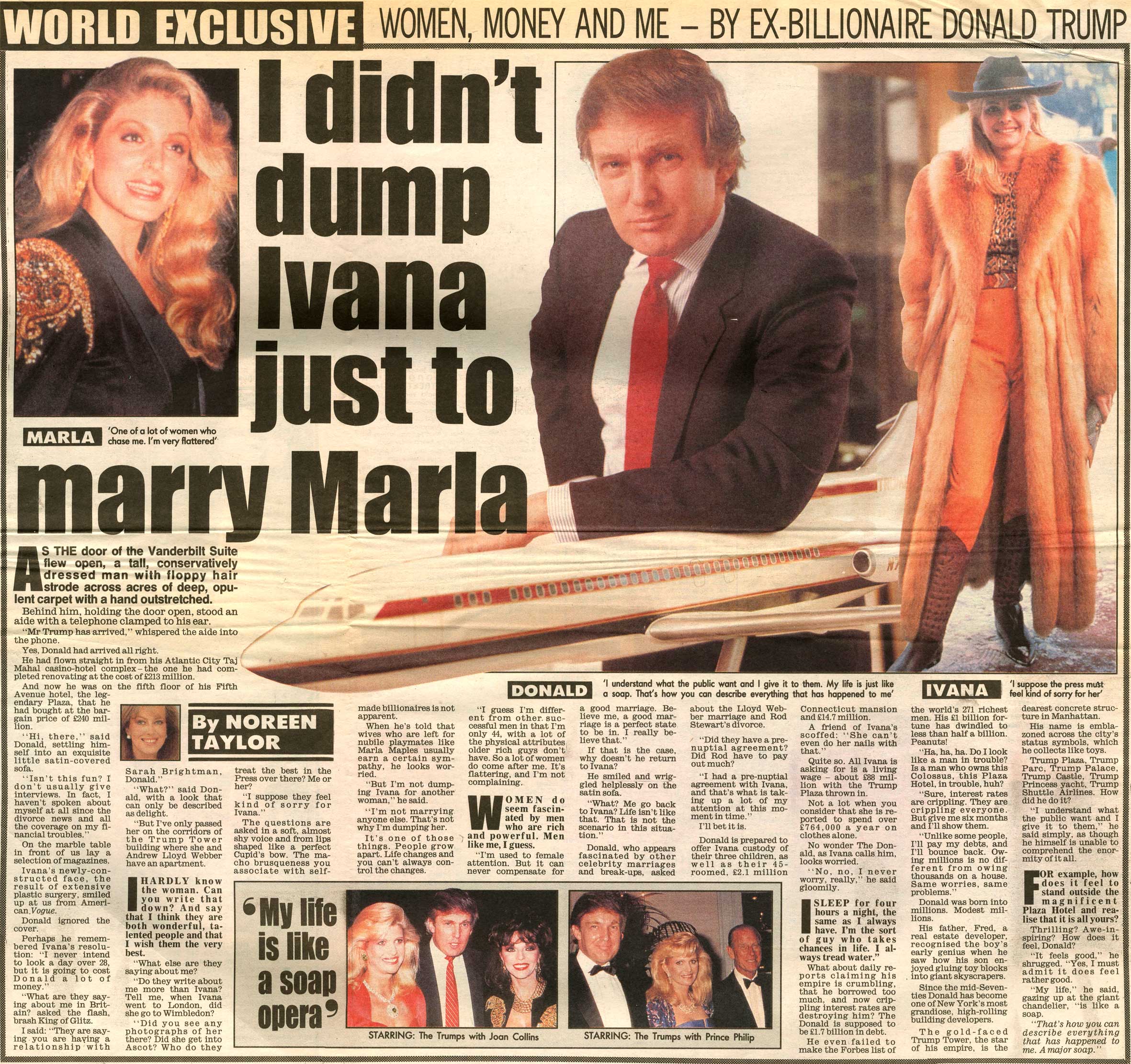