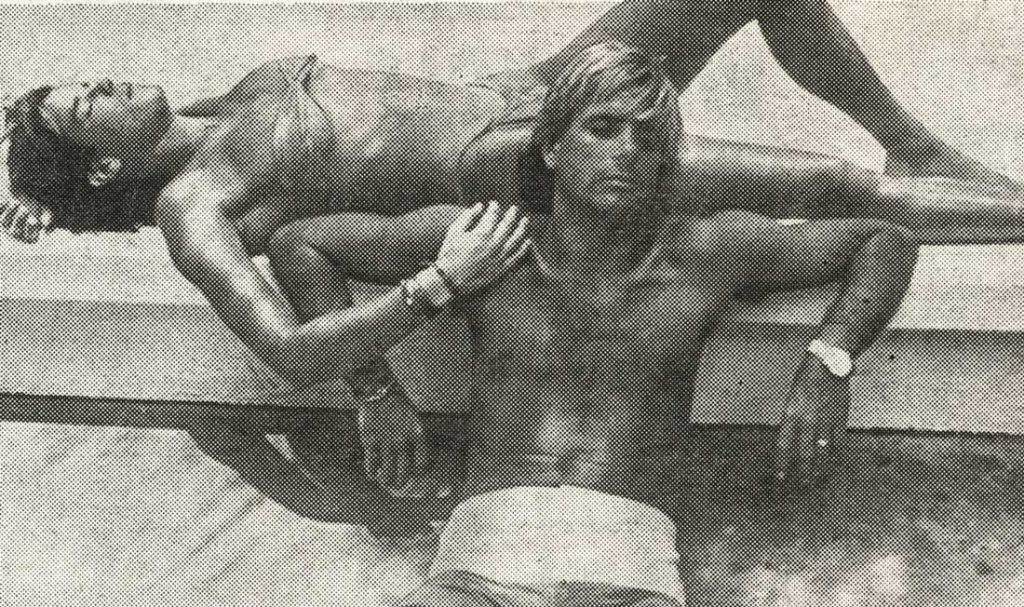 Princess Stephanie was born to a rich and privileged family – daughter of Prince Rainier of Monaco and film star Grace Kelly. But she has rebelled against Royal life, turning to fashion modelling and pop stardom – in defiance of her father. And she says she cannot stand the Kellys, her late mother’s family. “There are so many of them they drive me mad.” Now she’s talking of marriage to French club owner Mario Oliver Jutare, who is at the centre of a sex scandal. Today, for the first time, she reveals her passion for her controversial “beach boy” lover.

For a man who seems to spend a lot of time on his back, Mario Oliver Jutare has certainly landed on his feet. Since last October, the 34-year-old Frenchman has been the light and love of Princess Stephanie’s life and now, on this sunny Tenerife terrace, the Princess introduces me to him saying: “This is Mario, and he’ll explain that all those stories about him and that American girl are just lies.”

That girl, Deana Nance, 24, has claimed that Mario and a friend, Roger Lagneau, sexually assaulted her at a Los Angeles party in 1982.

Although both men were tried and given a 90- day suspended sentence, the Los Angeles court eventually wiped the case from their records.

Now, since Mario has become a headline name, Deana has issued a statement describing him as dangerous and warning Stephanie that “if she has any sense she will dump that creep immediately.”

Mario arranges his deeply bronzed body on the poolside lounger and hisses in his French accent: “Look at me. Do I look like a man who has to rape women? I am embarrassed to say it is the opposite. Stephanie will tell you that 1 am the one who has to push them away.

“Stephanie and I have a serious relationship. Yes, we have discussed marriage although we have not come to a final decision. And now this stupid woman is trying to spoil everything.”

Mario’s account of the Deana Nance story takes up most of the afternoon because Stephanie keeps lunging at him, pushing him back into the lounger while she zooms in for long, steamy kissing sessions.

Since she has a stunning athletic body, with the powerful neck and shoulders of a champion swimmer, Mario passively accepts this passionate onslaught. Coming up for air he gasps: “I am not a cocaine smuggler from Marseilles like they write.”

Mario says that he left Paris five years ago to work in Los Angeles for Guess Jeans. He then became a waiter in Sonny Bono’s restaurant before opening his own club, Vertigo.

As Stephanie walks off he begins the Deana story: “When I met this girl she was making a fool of herself. She turned up at the party alone, drunk and she started stroking my arm. She says in this little girl voice ‘Mario, where is the bathroom?’. I show her and she wants to kiss me. I find a place where we can be alone. We have sex. Then I leave. My friends are waiting outside. My friend, Roger, does the same and he leaves.

“Two days later the police come to the restaurant and arrest me. Oh, la la. I’m freaking out. I’m released on bail, and during the year it takes before the before the case comes up my friends tell me to leave America.

“If the judge believes this bitch I could be put away for nine years. But I stay to prove my innocence and God is on my side. Although my lawyer insists I do a deal and plead to a lesser charge – sexual battery – the judge eventually gave a no contest verdict.”

Stephanie returns to his side, towels the sweat from his chest saying: “Mario tells me everything about his life and I know he is not capable of what that girl says he has done.” Stephanie tries to climb into the lounger and Mario says: “Stephanie would like to kill her. Wouldn’t you, Stephanie?” Wisely, Stephanie demurs from answering that one.

“When I meet Rainier, I will tell him the truth as I tell you now,” insists Mario.

Suddenly, Stephanie starts shouting in French: “I’m so bored with all this bullshit.” She bursts into tears and Mario grabs her arms, shouting back: “Calm down, cool it be-be.” Stephanie runs off and Mario explains that she is upset because she has to interrupt the shooting of her video to have another picture taken with a civic dignitary.

“See how I handle her,” he says. “I’m not with her because she is a princess. I’m not a gigolo… God knows I’ve had my chances, but I cannot fake it. You know why she loves me? Because I treat her like a normal woman. Sure, I can afford her. I have made my money. I am buying a house for us so we can live together and be quiet and natural without photographers falling out of trees.”

Mario plans to open a chain of Vertigo clubs across America and Stephanie plans to be a pop star. “I’d really like to be a mom,” she confesses dreamily on her return. “I’m gonna be missing my little niece and nephew when I’m in Los Angeles. But there will be compensations. There are so many famous people there. Who’ll notice me?” she says somewhat naively.

“I’ll be able to walk around without crowds staring and pointing.

That stuff gets to be such a drag.” She explains that her American accent is a result of her upbringing. “Mom always spoke English and dad, French.” Whether mom, the classic ice princess, would have approved of Mr Tanfastic is another matter.

Mario says: “I’ve been married twice before but I don’t give myself to women easily. First time I met Stephanie last spring, I look at her, she looks at me and we know. She had to go back to Europe, so we did not meet again until October. I don’t understand why this actor Rob Lowe says they had a relationship. Is he so desperate he has to use Stephanie as a trampoline for his career?”

Stephanie joins in: “Every time I have dinner with a guy I’m supposed to be having an affair. Everyone wants piece of me, except Mario. He doesn’t care about me being a princess or a singer. He just wants to look after me.”

Shortly afterwards, Mario remembers that there is something else he wants to get off his chest. This time it is a little problem with the French police. “Stephanie’s manager says I should tell you that I was once accused of robbing stereos from a friend’s flat in Paris. Total rubbish and the police dropped the charges.”

The smitten Stephanie ruffles his hair. “Oh Mario,” she smiles. “I find out something new about you every day… and that’s how a relationship should be – fascinating, unpredictable.” 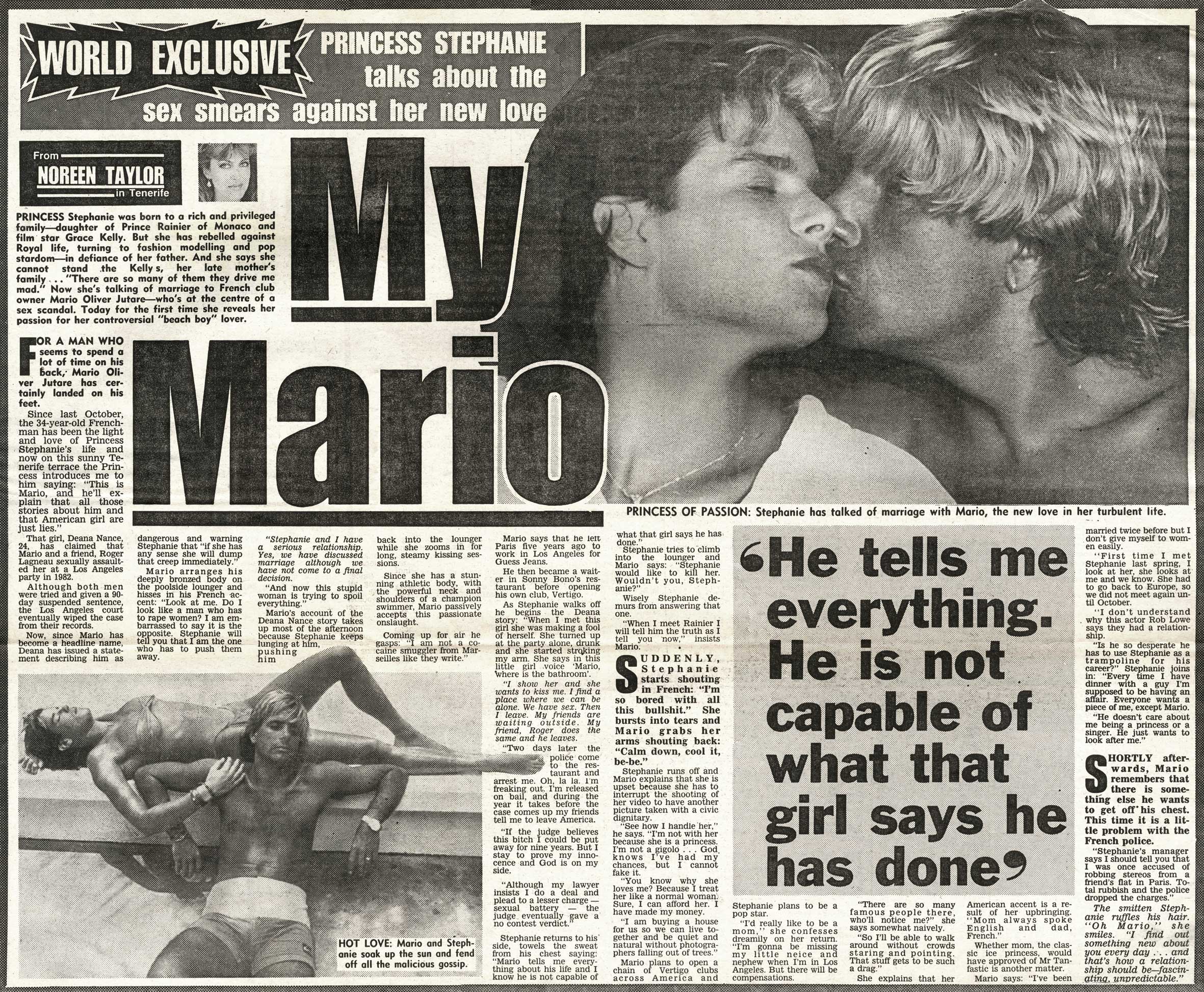