Shirley Temple — The most famous child on earth …but 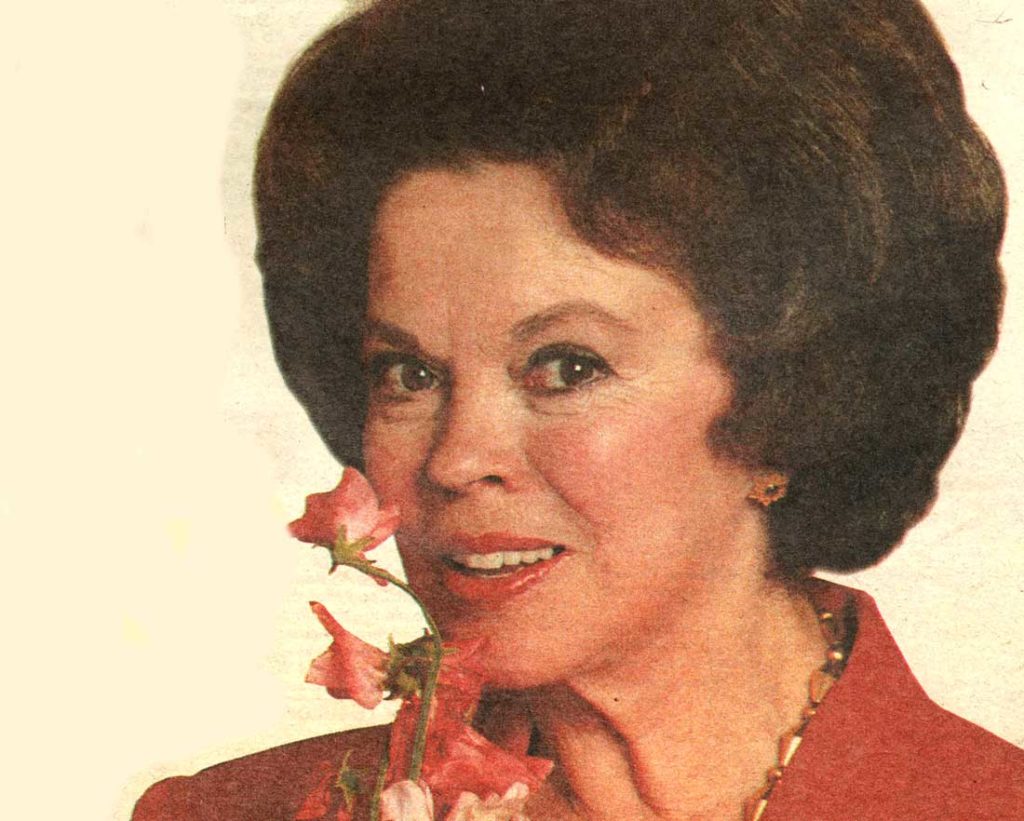 She was the most famous child on earth. Mothers everywhere wanted their little girls to look like Shirley Temple. Even the Queen and Princess Margaret had their hair teased into Shirley Temple curls and asked for Shirley Temple films to be shown at their birthday parties.

President Roosevelt, Albert Einstein and Noel Coward collected her autograph. Nowadays, it is hard to imagine a child with this power to beguile.

For four consecutive years, a singing, dancing, acting moppet was the top box-office draw across the world. She was a star at four, an Oscar-winner at six, and at seven had saved Twentieth Century Fox from bankruptcy.

And now she is a 61-year-old grandmother visiting London to do the publicity rounds for her auto-biography.* The first surprise is that she is not a hard-bitten, face-lifted veteran of drug and alcohol clinics on her eighth marriage.

The second is that she is so ordinary and so very nice. She doesn’t even mind the pests who have been plaguing her throughout her adult life. Because wherever Shirley Temple goes you can be sure that some wit will be jumping up and down singing her theme song On The Good Ship Lollipop.

Small, with tiny feet encased in red stilettos, her hair back-combed into a bouffant, she sits straight-backed and tells you: “I don’t believe my parents exploited me, so I have no regrets in that sense about my childhood. I have no regrets about my father losing most of my money, either. I ended up with thousands rather than millions.

“Poor man, he was just badly advised.  What’s the point in maudlin nostalgia? I have everything I’ve always wanted anyway. When I was little, my one great terror was that I’d grow up and be a lonely actress without any family and only scrapbooks and memories for company. And look what I got.”

Her husband, Charles Black, had walked into the room, and although they had been apart for a matter of hours they greeted each other like shy sweethearts. “Hi there,” he kissed her. “You must be Shirley Temple. Let me introduce myself.”

Shirley married for the first time when she was 17. It was a short, unhappy interlude with a drunk who beat her and tried to seduce another woman while they were on their honeymoon. “I hated all men after I divorced him. A couple of weeks later, I met Charles and it was love at first sight. I guess it’s kind of been like that for 38 years.”

She retired from films when she married Charles in 1950. “I had my three children, my little house and my husband. I did not miss Hollywood. I had, after all, been working since I was three-and-a-half.”

During the 1960s she came back into the limelight as a diplomat and ambassador. She now runs seminars in Washington for members of the diplomatic corps. Throughout that glittering, fairy-tale childhood there was always an element of diplomacy and pretence.

When she was 11, a middle-aged producer exposed himself to her. Shirley laughed and walked out into another office – only to find her mother on a couch, fighting off the groping hands of Hollywood czar Louis B Mayer. For Shirley, there were many groping hands, one attempted rape and various competing female stars desperately elbowing her out of camera range.

Known as One-Take Temple, she was a child prodigy – a Mozart of Film who knew everyone else’s lines and could cry on demand. “I can still do it,” she says. “Takes me about five minutes… and I can sob my heart out. I used it once when a police car stopped me for speeding. ‘Oh, officer,’ I said, ‘I’m so unhappy.’ The poor man gave me a handkerchief and apologised.”

Her book is dedicated to her mother, Gertrude – the woman who stood out of camera range whispering: “Sparkle, Shirley, sparkle.” It was also Gertrude who connived with the studios to lie about her daughter’s age. On her 12th birthday, she told Shirley she was really 13.

It seems that Gertrude was the ultimate in stage motherhood. Every night she wrapped Shirley’s hair into 56 pin curls, and when the curls began to darken she lightened them with peroxide.

Swimming was permitted only if Shirley agreed to her head being bound by swathes of bandages and then covered by two bathing caps.

Yet there is no bitterness towards Gertrude, only understanding. Shirley says: “I had a talent I enjoyed using, and Momma was my main support. If I’m normal, then I have her to thank.

“Certain child stars like Judy Garland had problems because they were being forced to work. But nobody forced me. I loved performing. My mother would not allow me to become spoilt through flattery. I was not allowed to mix with the other stars. I had my own little bungalow where I ate and studied.”

She makes it sound so idyllic, yet there were scenes from her childhood that would have scarred another, weaker, personality.

On several occasions, when she was naughty on the set during filming, she was locked inside a large black box. There was nothing inside except a block of ice. So, when the four-year-old grew tired there was no escape except to collapse on the ice block.

On another occasion she was told to act sad because her mother had been kidnapped by a green-eyed monster. Amazingly, her reaction to all this is a shrug and a flash of the famous dimples: “Well, it didn’t happen too often.”

Her English publishers have a lot to smile about. During her book signing at Harrods last week she broke all previous records set by Joan Collins and Elizabeth Taylor.

Thirteen hundred books were signed in two-and-a-half hours. Harrods had only seen crowds like that at sales. “I had no idea who she was when I met her,” says Charles Black. “But I’m sure glad I did. She is one special lady.”

Six-year-old Shirley first sang The Good Ship Lollipop in the 1934 film Bright Eyes. The Good Ship was in fact a plane that never left the studio runway.

Lloyds of London, the company that insured the child for $700,000 would not allow her to fly. Instead, little Shirley sat in the cockpit with a wind machine behind her, wearing a specially designed red leather flying jacket and helmet.

The song, written by Richard Whiting, became the Shirley Temple theme and sold more than 400,000 copies of sheet music, overtaking the singing idol of the day, Bing Crosby.

Shortly after the film came out a woman walked into the bank where Shirley’s father worked and offered him a $10,000 stud fee. The final payment would be made on the birth of a baby girl.

Naturally he was flattered, but he refused, explaining she might have a lookalike, but there was no guarantee she would be another film prodigy. There was only one Shirley Temple… and how right he was. 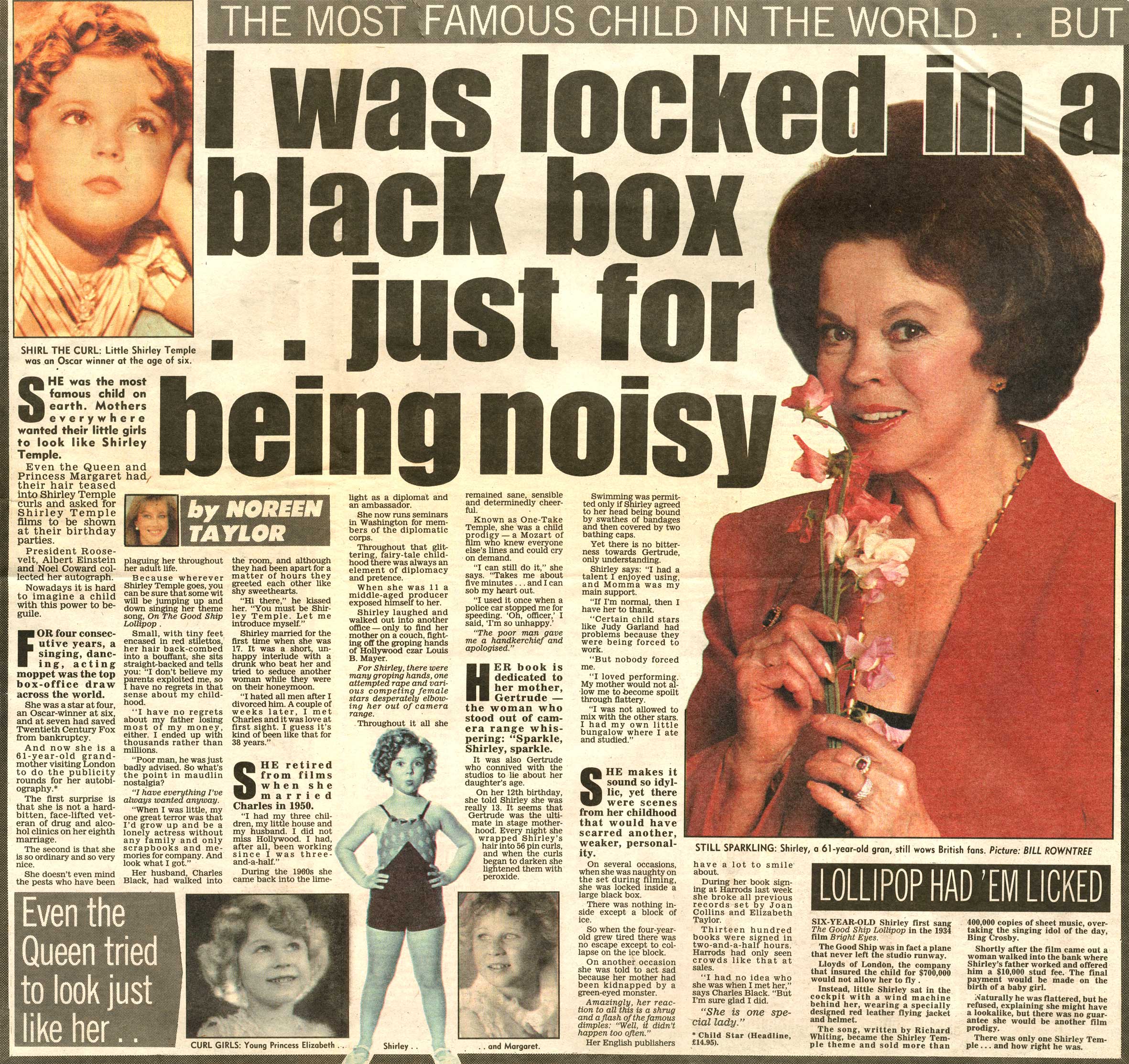