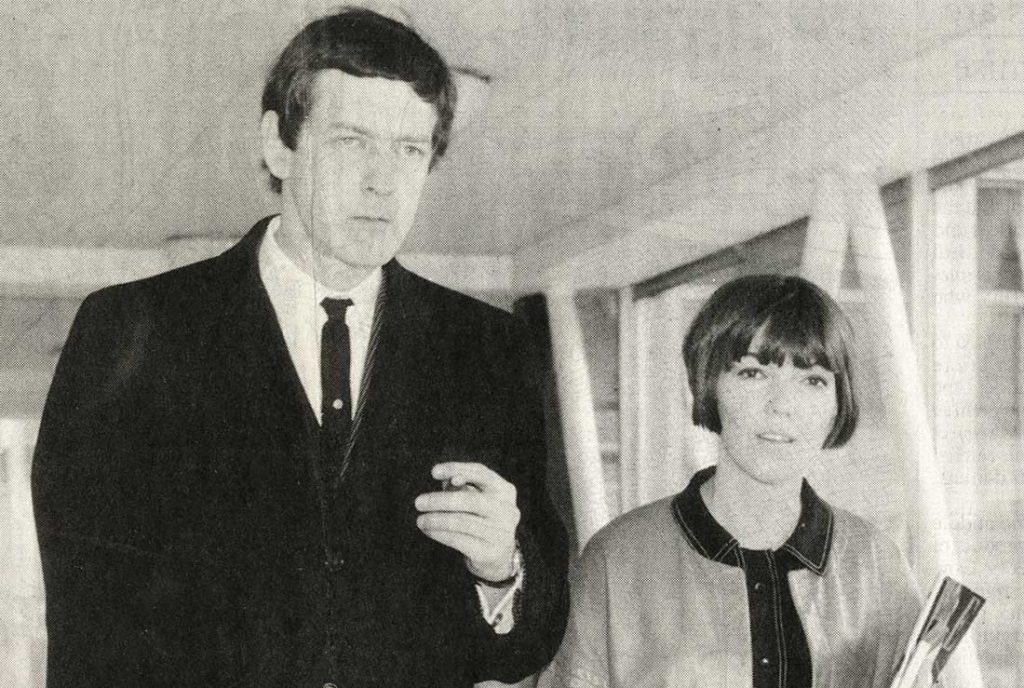 The fringe has remained defiantly in place, sitting just below the eyebrows, brushing the eyelids. The lipstick is a chalky Bardot-esque pink, an unflattering shade on a woman of 61. Somehow, on Mary Quant, it seems, if not quite right, then appropriate.

“Hello, I’m Mary,” she whispers, darkwitchety eyes blinking the way a gauche adolescent’s might in the company of adults. “Would you like to, em, maybe, em, come and have a look round my shop?”

Sentences are punctuated by old-fashioned exclamations: “golly… crikey… gosh…” The adolescent aura strikes one as odd, coming from this legend, this little woman, one of the people who practically invented the Sixties. Think mini-skirts, PVC raincoats, skinny-rib polo-neck sweaters: muted colours of grape, smoky browns, greys.

Go on to yellow-based make-up, smudgy eyes and china-doll haircuts. The Look created by Quant: sulky French convent schoolgirl, all uncompromising puritanical lines, cut with a dash of Lolita erotica.

The Look is currently dancing again across the pages of Vogue, enjoying a renaissance on the backs of King’s Road babes.

As in the Sixties, the Nineties version is totally ruthless, ignoring the over-35s or, indeed, anyone careless enough to need a size 16. As Quant says: “You can’t wear fashionable clothes if you are that size. Yes, I know 47 per cent of women are over size 16, but so what? Tough. Skip lunch. Live on oranges for a day. Do as Frenchwomen do.”

She, of course, has barely gained a pound. In her cream-coloured Equipment shirt, slim black Japanese trousers, black ankle boots and a man’s watch, the overall Look is much the same as it was then. Then was when she dressed the generation who gyrated to “Yeah, Yeah, Yeah”, who shocked the grown-ups, who fled the irrelevant femininity of their mother’s set.

Quant was in the eye of the hurricane, one of the icons whose face personified all the mad excitement of a decade, as globally familiar as the four mop-tops, E-type Jags and the King’s Road. And yet she doesn’t come across as someone who once dominated a generation.

Modest, straightforward, she potters about the white-walled shop hiding behind her fringe, chattering about sweater shapes and pointing out the 80 lipstick colours with all the keenness of a design college graduate on her first job. Tucked behind the Fulham Road in west London, the shop is on the ground floor of the building housing the head-quarters of Mary Quant Ltd.

Along with fashion, and the cosmetics design business which was launched in 1966, the Quant empire makes around £160 million a year in royalties. There are 200 shops in Japan and plans for more openings in the Far East, as well as lucrative licensing agreements ranging from Max Factor to Allied Breweries.

The company’s growth and development were a result not only of Quant’s design genius, but also of the marketing and business talents of her husband, the witty, urbane, upper-class Alexander Plunket Greene, and their friend Archie McNair, the business’s financial eminence grise for more than 25 years.

Now, apart from her son Orlando, aged 24, Quant is alone. Archie retired and tragically, her great love and mentor, Alexander, died six years ago. From behind her office desk, piled high with sketch pads and pencils, her head droops in sadness when I mention Alexander’s name for the first time.

“At first, I thought I was dead too,” she says softly. “And then I became used to the idea that life is a privilege, a wonder, jolly nice in fact. Having projects helped me, goals to strive towards that made me see life was worth living, that it was worth going on in spite of wanting.”

Her voice trails away for a moment… “Well, I’m sure you can imagine how it is, that kind of loss. I would look at the sun coming up in the morning over a field near my house and think… yes, I have another new day, and I’m going to get through this one.

“And then I’ll face another day, and so on like that, until I finally convinced myself that Alexander would have wanted me to appreciate everything and not waste a moment. Thankfully, I have my lovely house in the country. If I’d had to move from that, I couldn’t have taken it. That would have wrecked me.

The Surrey house, set amid acres of rolling fields and surprisingly rural in spite of being so close to London, was built by a great-aunt of Alexander’s in 1928 as a rather grand country retreat, mostly for picnics and weekends.

Alexander used to say that Mary was the first to design for the masses, for the working girl. Yet since meeting Alexander at art college during her teens, the schoolteacher’s daughter, born and brought up in Wales, has known only an upper-class Bohemianism. Long-haired Alexander used to dress in his mother’s silk pyjamas when she first met him.

“Yes, I suppose crossing classes seemed less of a thing then because of post-war change, when we were inventing the rules to suit ourselves. For instance, I don’t suppose Alexander would have gone to art school had it been some other period. It wasn’t smart then to come from a grand family, and people re-arranged their accents accordingly.

“But I think the British upper classes have always been adept at taking what they like from other social strata. John Fowler and Noel Coward might be good examples. After the war there was nothing for young people. No music, clothes, places to meet, a wasteland. So there were no obstacles in the way of people like us, Terence Conran, David Bailey, Donovan. We simply shot through.

“I designed for women who had become economically independent and bought their own clothes. Before me, mothers had gone with daughters to choose and pay for clothes. So girls looked like their mothers: fussy, over-dressed and made up in hard, heavy colours and textures. There were three shades of eye-shadow: green, bright blue, and lilac. Lipstick was either a bluish red, dark red, or coral. All of it ghastly.

“When I started making clothes, I only had theatrical and art school chums as customers. I was designing for myself and my friends. In 1955, Alexander inherited £5,000 on his 21st birthday and with Archie’s help, he got a mortgage on a house at the comer of Markham Square and the King’s Road. We called it Bazaar and from the first Saturday it was filled with painters, actors, journalists, poets, like one of our parties.

“That’s just how it ran, like a never-ending party, bottles of wine everywhere, music, people prancing around. So, when the big boys, the manufacturers from America came to Bazaar, I felt quite… oh no, this isn’t for you, it’s for my pals.

“I’ve never been ambitious in that sense. For me it’s always been an adventure as in ‘Let’s do this and see how it works’, or ‘What if we tried… ?’ I wanted skinny clothes to follow the shape of young bodies. I simply did what excited me. I wasn’t trying to please or impress the rest of the world.”

But, of course, that’s exactly what she did. And then came the Seventies and the Eighties, different worlds reacting against what had gone before. Quant simply was not a kaftan sort of person, nor was she a glitzy, shoulder-padded woman either. So in the Seventies and Eighties she concentrated on her new interests: hearth, home, garden and kitchen.

“I’d become quite broody by then. I’d had Orlando. My interests had changed. Unlike the Sixties, where a house was a place where you dumped clothes, or where you went when there was nothing better to do, the home now became a new focus and I found myself being asked to design, oh, everything from duvet covers to washing machines.

“So that was jolly nice and kept me very busy. The three of us seemed to be constantly airborne between New York, London and Japan. I couldn’t bear to be separated from Orlando, you see, so he travelled with us until he was seven when the school got rather cross. We tended to spend more time in our house in France and I cooked, gardened, still kept up the work momentum, except I was less involved with clothes.”

Now it’s back to clothes again. Back to the delicate skinny sweaters, to tiny, doll-like skirts and furry-belted coats. “Well, not quite. If I pulled out some of those old Sixties clothes, you’d soon see a difference. Materials like Lycra have so improved the look of clothes.

“And things are never put together in quite the same way. Anyway, I’d be bored doing the same old thing all over again. Fashion is about change, rather like life.” Orlando, her only child, is now so obviously the joy of her life.

When she talks of him she becomes quite giggly, bubbling over with enthusiasm, describing his love of style, and how he dresses like his father, a tribute to the traditional English tailor, but always with some idiosyncratic touch.

“He’s selling space on a marketing magazine. And he’s so good at it. I’m not sure what he’ll want to do eventually. Be lovely if he did want to join me here, although I feel he should have a look round other worlds first before making that decision.”

Orlando’s future is yet to unfold. Yet his mother has closed no gates. “My passion is to move forward, constantly discovering, renewing, discarding the old. I’m not a particularly reflective person.

“I mean, I don’t wallow in nostalgia thinking, ‘Oh wasn’t it wonderful back then’. For me the wonder is still ahead, still in the future. I know that’s how Alexander would have wanted me to think too. I embrace life for him.” 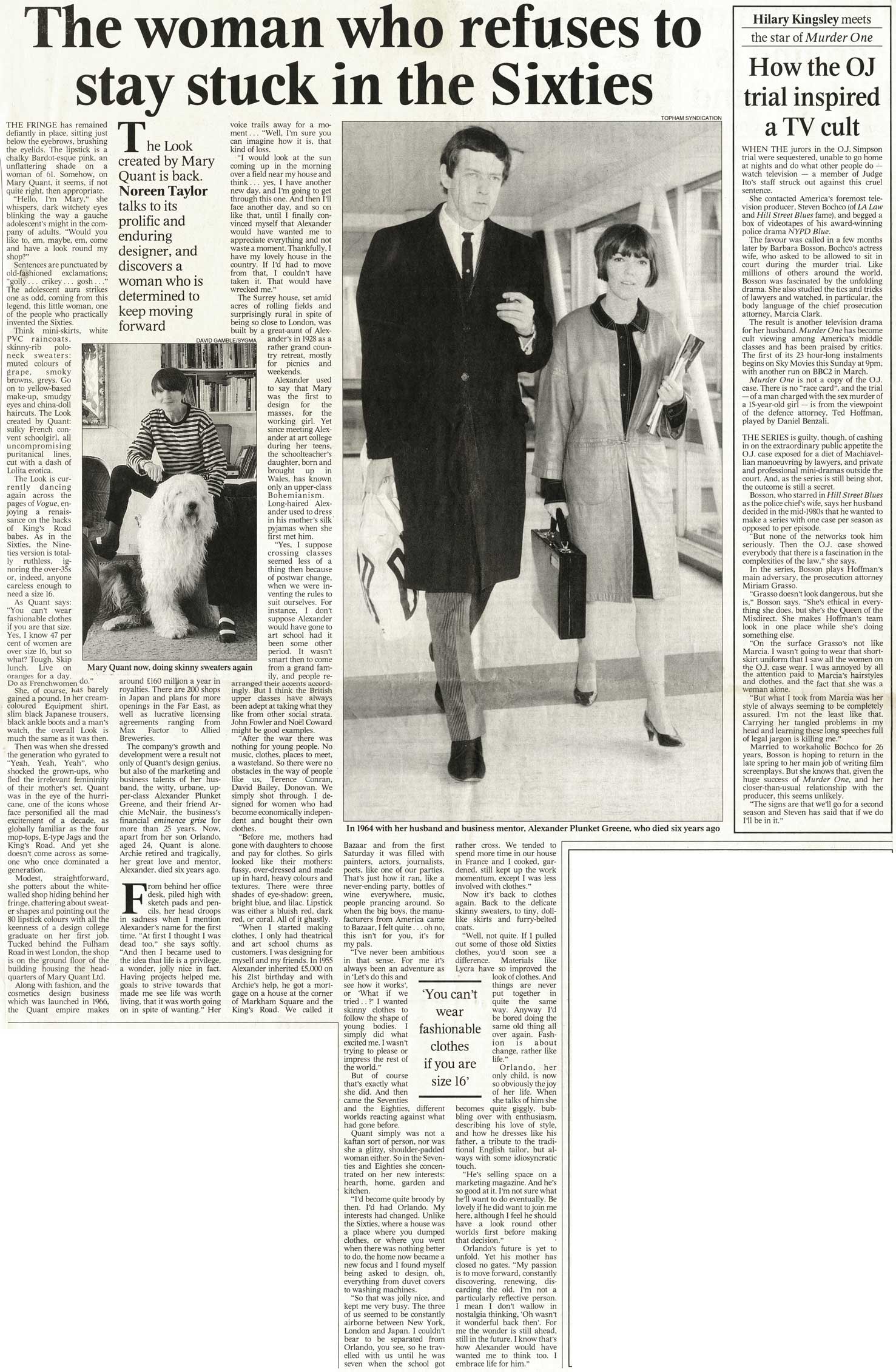