Interview with Imran Khan, in the Daily Mirror, August 1982

Imran Khan is worried in case I portray him as a sex symbol. This is possibly why Imran is stretched across his hotel bed wearing only a petulant expression and a pair of tiny, black satin shorts.

I should be asking the Pakistan cricket captain about his team’s chances against England in the second Test being played at Lord’s. But somehow it seems more fun to remind the beautiful Imran about the chances he takes with women.

For instance, didn’t Oxford-educated Imran once tell me: “Most of the girls I go out with are not what you would call worldly. They are young girls who don’t have a great deal to say for themselves. I like them to be tall, with very long legs.”

Imran’s girls are noted for their beauty. Like the sensational Indian film star Zaneet [Zeenat] Aman, or the models he takes to London nightspots like Tramp and Stringfellows. An Imran watcher says: “His girls have to be 100 per cent stunning. Imran is not interested in anything less. And you never see him with the same one for very long. He likes to move on.”

Wherever Imran moves, India, West Indies, Australia, there will be scores of girls taking a keen interest in the finer points of Imran’s fast bowling technique. “I was voted the sexiest cricketer in Australia once. There used to be all these girls ringing me up on my day off. Other players would come back relaxed ready to play and I would be absolutely exhausted.”

Now Imran is lying on his bed, not through exhaustion, but through a muscle injury from the Test at Edgbaston. “There is so much pressure on us to win,” he says, turning to bury his head in the pillow. It would mean such a lot to the Pakistanis over here.”

Imran takes care point out that he is not only a Pakistani but also a Pathan. The Pathans are a proud, warrior-like tribe from the North West Frontier close to the Afghanistan border, which explains the pale, lean, high cheek-boned features of Imran.

“They are a fighting people, extremely honourable, the ones the British could never colonise,” says Imran with a whiff of aristocratic disdain. “I’ve been playing county cricket in England for ten years and I’ve enjoyed the discos, the theatres, the cinemas. They are all wonderful, and they are the sort of things we don’t have in Pakistan. But when I’m finished with cricket there is no doubt in my mind that I will go home and settle in Lahore.

“It may be difficult for people of your culture to understand my closeness to my roots and my need to be beside my family. That is why I could never marry a girl who was not a Pathan. No outsider could ever adapt or be accepted.”

This is bad news for the tribes of admirers. Especially when Imran explains that his future bride will be chosen by his parents. “It would be impossible for me to make a love match in Pakistan where there are no dance halls or nightclubs in which to meet the right sort of person. So, I have to rely on my parent’s judgment… and on my mother to pick a pretty one,” he says with a quick smoulder over the shoulder.

Is it so difficult, as Imran quaintly puts it, to make a love match outside Pakistan? What if he fell in love with the virginal 17-year-old daughter of a British duke? Would that be acceptable? “Oh, no. No, no, no.” Imran is now holding his head in despair. “It is not just a matter of virginity. It’s that she wouldn’t be one of us. And if she’s not one of us, she would not be able to accept the lifestyle.”

He’s got a point. It would be difficult for Imran’s rah-rah skirted admirers to step into the strict Moslem world that is Pakistan. A world where subservient, submissive women know their place – usually a few respectful paces behind the men.

All this talk about home has brought a wistful look to Imran’s eyes.

“Life there is so luxurious for us,” says the landowner’s heir.The climate is beautiful. There are people to look after us.  Most weekends one is invited to a shoot. It would be impossible to have a similar standard of living in England.

“Anyway, I wouldn’t want my children to be brought up here. The Pakistanis I see here don’t seem to be very well off. They have a timid look of inferiority that probably comes from living in a racist society.

I think England is becoming more racist all the time. And there is no way I would wish my children to feel inferior. That is why I see my life here as a cricketer as a temporary thing.”

He adds: “I never thought I’d be playing this long anyway. But suddenly, I’m almost thirty, and I find that I’m at my peak. So I shall carry on for few more years.”

This concentration on the man rather than the world class cricketer who bowls for Sussex and Pakistan is puzzling Imran. “Don’t you want to take down a few notes about the Test?’’ asks the Man of the Match at Edgbaston. “I’m not all that keen on the sexy image.” 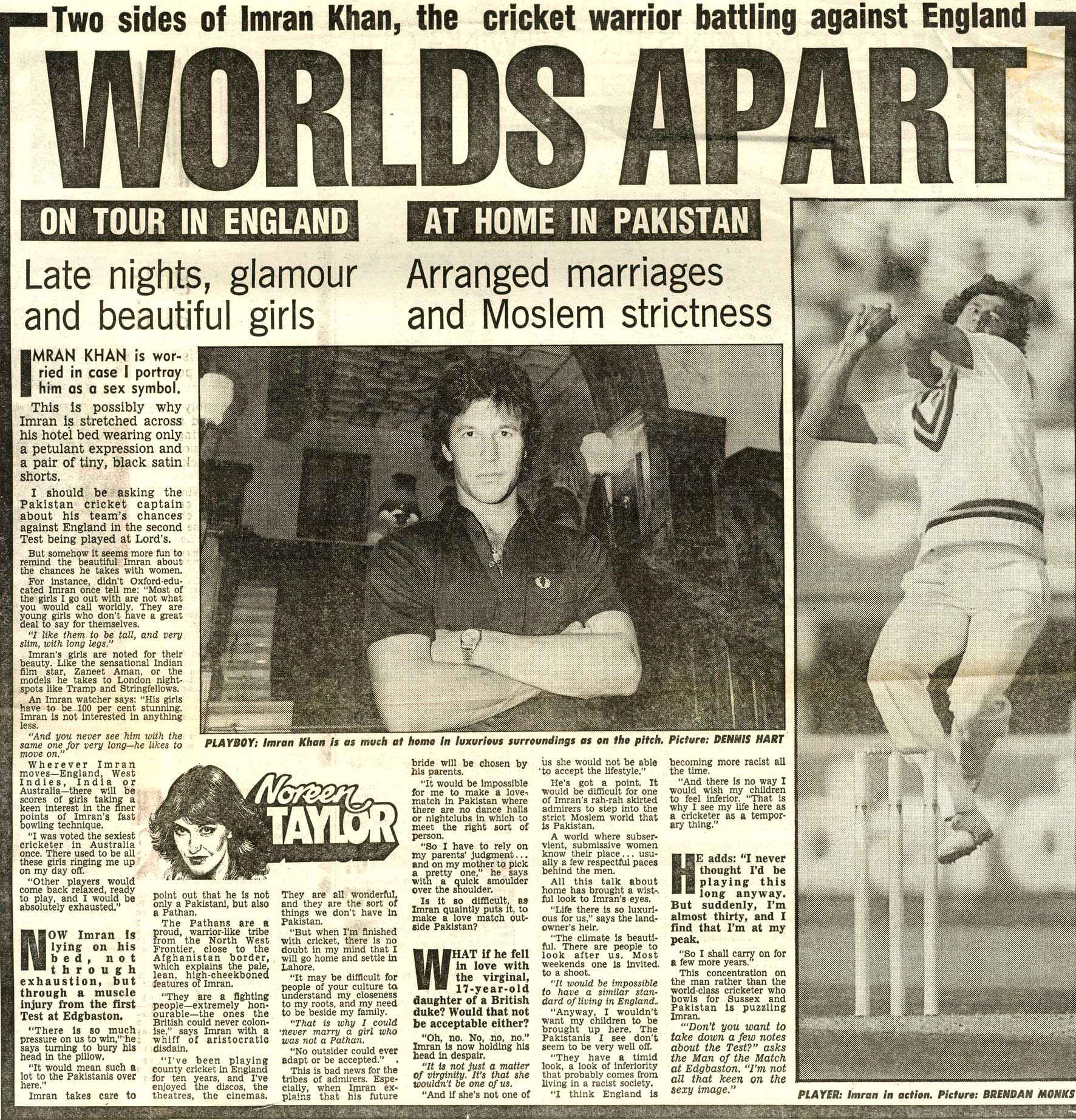