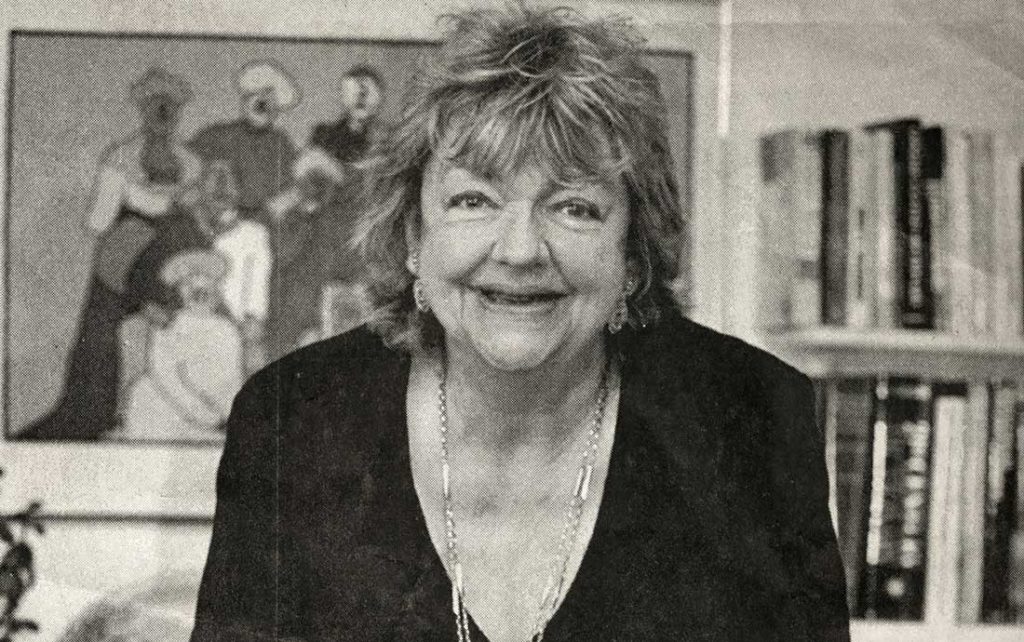 The pain that haunted Maeve Binchy for years has gone. Since last year, when she lost 5 stone in order to have a hip replacement operation, she is once more able to sleep and to move around her house without sticks.

The agonising aches and stiffness have passed, along with her fear that she would spend the rest of her days in a wheelchair. “The six months before the operation were the worst ever,” says Binchy.

“Unable to sleep, drink or eat, apart from 400 calories a day, I ended up hallucinating and becoming so depressed that even my diary was full of self-absorption and pity, qualities I loathe.

“During the operation they gave me tranquillisers and an epidural, and I talked throughout. 1 must have driven them mad, babbling away like a maniac. I was told I asked the surgeon, ‘Is there a building site in the next room? Everywhere I go in Ireland, that’s all I hear, the sound of sawing, drilling and hammering. It’s the Celtic Tiger’. He replied ‘No, it’s your hip we’re working on.’”

Binchy, 58, emanates contentment, wisdom and fun, the living embodiment of the novels that have made her one of the world’s top-selling authors. For her readers, a night in with a Binchy novel must seem as reassuring as a warm duvet — uncomplicated and unchallenging, a world where good triumphs, the hopeless are understood and hugs abound.

Her sixth novel, Tara Road, out this week, is being heralded as the publishing event of the year. It is said to be the first book in fiction history to warrant an advance of one million copies in hardback.

“Well, I suppose they have to say that,” Binchy demurs. “Publishing hype, that’s all.” The novel, her first set in the 1990s, is about two women who swap houses, “something I know about as we used to switch houses with a couple in Sydney.”

The subplot is about a woman who thinks she is happily married until the bombshell drops. “I’ve known such women and can never work out whether it’s smugness or stupidity that makes them harbour such illusions.”

With her husband, Gordon Snell, a noted writer of children’s books, she spends most of the year at their house in Dalkey, a pretty coastal town south of Dublin now enjoying a fashionable renaissance. “I was brought up in that house over there on the hill.” She points through the window of the office at the top of the house, where she works side by side with Snell.

“In the 1950s, Dalkey had one fish and chip shop; now there are 14 restaurants and we have film stars for neighbours. Then, all I can remember were elderly ladies in grey twinsets, cycling around quiet streets, keeping their eyes out for gossip. Ireland has changed beyond recognition. We have chefs flouncing around. We’re confident. We have smart Europeans swarming all over us, and our children go abroad to study instead of emigrating. We started off planning to spend half the year here. Now we can’t tear ourselves away.”

The house, like their London one, is unshowy, with no visible sign of the millions she has made. With five best-sellers, one of which, Circle of Friends, became a successful film, she could easily afford one of the swanky white palaces nearby. Last year, when she published her fifth novel. Evening Class, she grossed an estimated £2.6 million.

“People seem disappointed. ‘We thought you’d be in a mansion,’ they say. Why? This place is perfect for us. We can walk to the shops and station, and the pub’s next door.”

Binchy is maddeningly diffident about herself and her work. Recently, a Dutch couple who had won a Weekend-in-Ireland contest arrived on her doorstep, because lunch with Binchy was part of the prize. “Lovely people. We sat here talking, eating and drinking wine till after five, when suddenly the woman covered her face with her hands as though she was about to have a breakdown.

“‘I have a confession to make,’ she said. ‘I’ve never heard of you. I’ve never read any of your books. I took my sister’s ticket because I wanted to visit Ireland.’ What could I do but laugh and tell her not to be embarrassed? Sure, didn’t we have a great afternoon, and that’s what matters.”

Binchy, who completes a book in about seven months, cannot understand people who spend years on a novel. “I keep the sentences short, though the books are long. I write about middle-class life untouched by politics for the simple reason that the Ireland down here is an alien land compared with the one over the border.

“Like everyone else, I watched the news after the Omagh bomb with tears running down my face as those little coffins were being carried along country roads. We’re fortunate here in our freedom from tribalism, bigotry and fear. But I love going to Belfast, where I sign books for people with names as diverse as Wesley and Hazel, and Kevin and Maria Goretti. People say I’m ‘a good wee girl for coming up here.’”

The impression she gives of the easy-going raconteur is not altogether accurate. “I’m at my desk at seven. I could lie in bed in the mornings telling myself I’ll wait till the news is over, but I could be lying there until Woman’s Hourif I got into that regime. I’ve convinced myself that if I don’t get up at seven, the ceiling will fall in. By one, I’m finished, leaving the afternoons free. At night we go out, see friends or play bridge.”

What about rewriting, correcting? “I don’t ever correct or review,” she says. “Each morning that usually gets me started. I write as fast as I talk.”

One of four children, the daughter of a nurse and a barrister, Binchy was blessed with parents who thought their children the most wonderful ever born. Under their adoring eyes she blossomed into adulthood, confident, armed with a benevolent tolerance that believes there are no wicked people, only poor souls who have never known love.

“I must be such a boring interview,” she says. “Nothing terrible has ever happened to me. I met and married the man I love in my thirties when I thought all that had passed me by. Success and money came in my forties, when I’d my head screwed on. One minute we were struggling to pay the phone bills, the next there was all this money floating around.

“I’ve never really searched for success, never felt there was some hole in my life that needed filling. I’ve only ever wanted more of the same.” Formerly a teacher of French and Latin, before switching to journalism, she recalls going to London in the 1970s: “I was surprised when I walked along Fleet Street from the Irish Timesoffice that there were no shouts of ‘Hello Maeve’, like in Dublin.

“In the evenings, when everyone put the covers on their typewriters and went home, I’d stay on and write stories to fill in the loneliness. Gordon, one of the reasons I came to London, was working at the BBC, but I didn’t want him to think I’d nothing to do but hang around waiting for him. He seemed the kindest, most generous of men, always having parties for people coming to or leaving London.”

Unlike most journalists, she seems devoid of cynicism. “I hope I don’t appear all gooey but I’ve never managed the cynical bit. When 1 was covering the election campaign for former PM, Charlie Haughey, I heard him talking in a rather cold, distant way about some local farmers who were canvassing for him.

“I should have reported his words to give an insight to his character but couldn’t bring, myself to humiliate those red-faced men who had worked so hard on his behalf. So I probably wasn’t that good.” 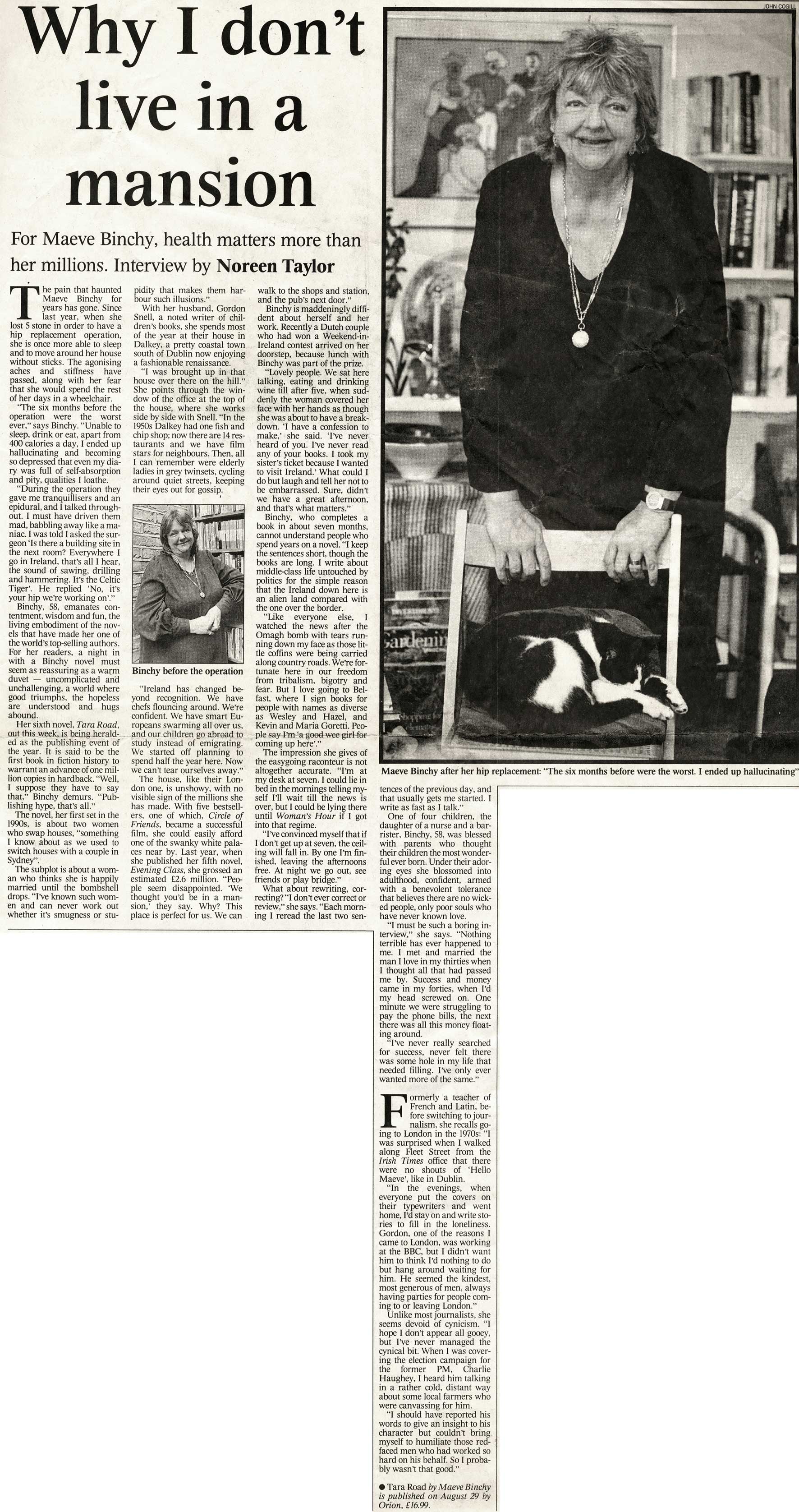