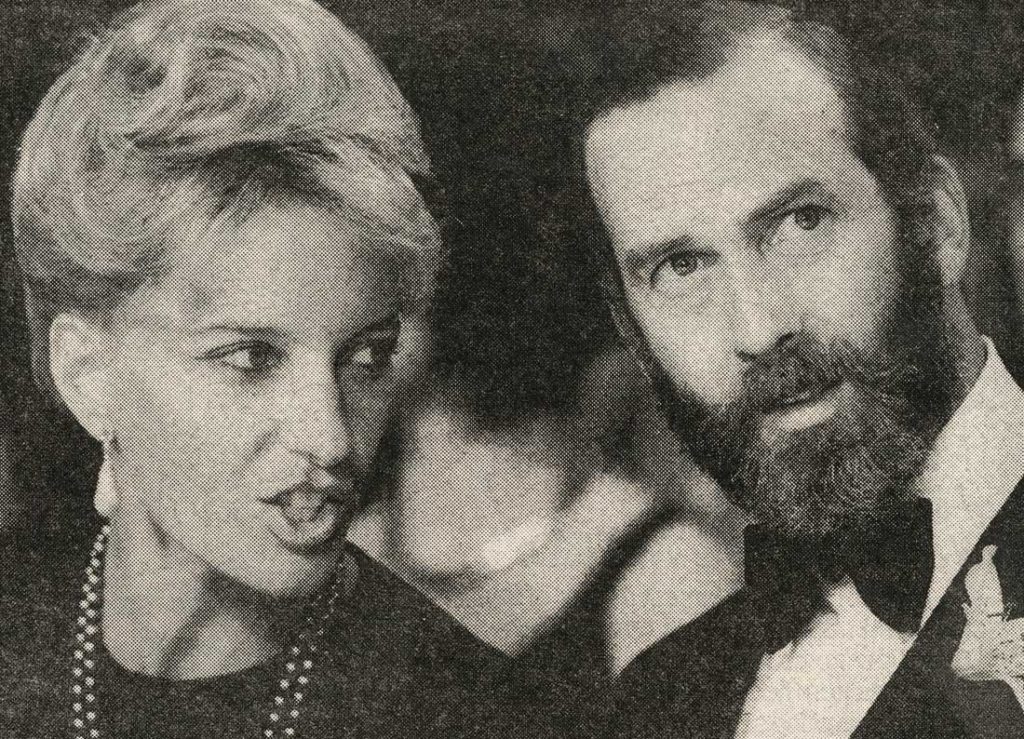 Princess Michael reminds you of an actress who has been laid off over the summer months and is now hell-bent on making a comeback.

Her first starring role was on Wednesday night. Prince and Princess Michael were guests of honour when Italian designer Gianni Versace held his fashion gala at the Victoria and Albert Museum.

It was her first major public appearance since the April revelations about her father’s SS connections and the news in July of her alleged friendship with a certain Texas tycoon.

She knew that the eyes of the world’s Press – and those of every celebrity she was about to meet – would be fixed on her. But she didn’t look in the least bit nervous or insecure. And she played her part to perfection.

She waltzed through the doors of the museum in London at 7 pm, wearing a slinky black number and a pair of drop-pearl ear-rings.

Behind her, looking slightly bewildered, strode the devoted husband, Prince Michael. He could have been the invisible man as far as the room full of celebrities were concerned. Maybe that was why she just slightly overplayed the loving wife bit for the photographers.

Unlike any other royal, Princess Michael delights in posing. She freezes so every handshake can be recorded. Like the instinctive actress she is, she knows the value of a lovey-dovey shot of her and the Prince.

“Be nice for them darling,” she says to her still bewildered husband standing next to her. Boring shot, so she turns, plucks a flower and hands it to him with lots of hand brushing and coy eye contact. Picture over and he is still standing there feeling a right Wally with the flower in his hand. A breezy Versace aide rescues him by pinning the flower to his lapel.

Now it’s time to circulate. “Dreamy” seems to be Princess Michael’s favourite word. The flowers are so “dreamy.” Your dress is “a dream.” Your hat is “a dream.” Prince Michael looks as though he’s having a bad dream. He can’t handle this brand of cocktail chatter as brilliantly as his wife.

The grand reception room is throbbing with the jet set. This is Princess Michael’s gang and she is totally at home. A few showbiz faces hang around waiting to be introduced. Jean Marsh, of Upstairs Downstairs fame, says to Prince Michael: “I almost bumped into you on the slopes of St Moritz this year.”

The Prince replies: “Oh.” And glares into his glass. However, his eagle-eyed wife is careful to ensure he is not stuck with the same group too long. Suddenly, the hum of mindless conversation stops. The crowd parts. It’s Jerry Hall and her friend, Marie Helvin. Giggling like a couple of schoolgirls, they are ushered into the presence of HRH.

As the reception comes to a close, the guests, led by the Royal twosome, leave for the fashion show, which is being held in another room. Halfway along the corridor, the Princess realises her husband is still clutching his champagne glass.

Deftly, rather like a mother with a young child, she gently takes the glass from his hand and leaves it on a side table. “No, darling, you cannot take that glass with you to the show,” she explains patiently.

Seated close by I could only marvel at the Princess’s social agility. To observe her in action is to understand that she’s more of a business phenomenon than a stiff Royal. “Speech, speech,” she cries across the top table to Gianni, clapping furiously. “Bravo, bravo, bravo,” when he finishes his few sentences in broken English.

Just after midnight, she rises from her chair and says to the Prince: “I think it’s time we went.” He’s out of his chair in a flash. Outside the limousine with the Royal crest waits – along with another set of photographers.

The Princess is in a wonderful mood. She has sailed through her comeback night without a hitch. She is back where she belongs: centre stage with a full house.