Tom Hanks, is he just another joe? 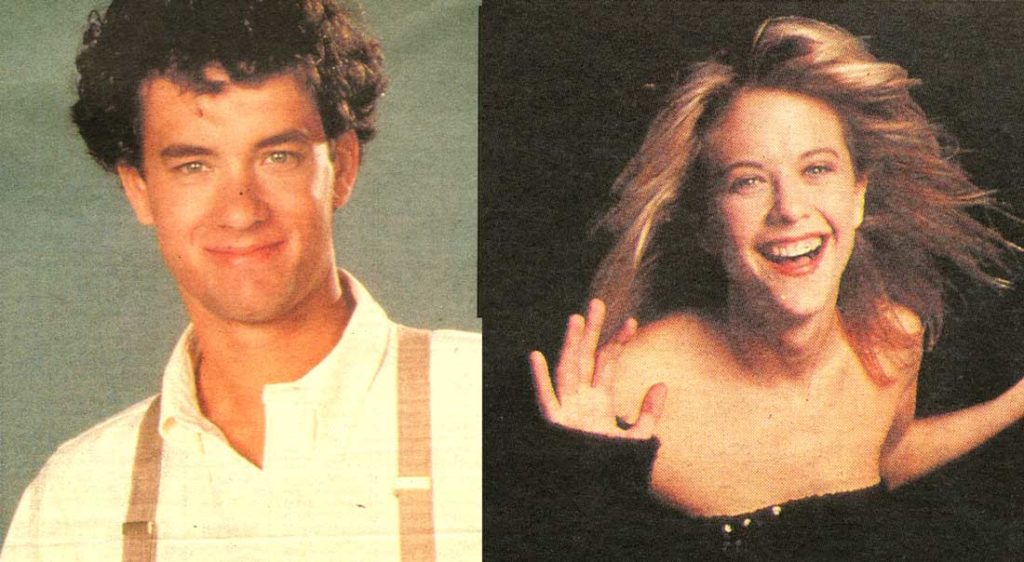 Tom Hanks walks into the hotel room in West Hollywood with his hair uncombed, wearing an old check shirt that half hangs out of his trousers, and looks out of the window into the blazing noonday sunshine.

“What am I doing in here?” he groans  aloud in mock agony. “The sun is outside, and I’m, as usual, inside. No wonder I look like this… a puffy white blob.”

Actually, he’s 6ft 2in tall, 34 years old and the shape seems fine, although certainly rather pale for a man who lives in Santa Monica, a Frisbee throw away from the Pacific.

As a breed, Hollywood stars do not specialise in self-deprecatory one-liners that draw your attention to their physical flaws. But then Tom Hanks is no ordinary, neurotic, me-obsessed actor. He is that fresh, rare Tinsel Town commodity, a man who sees himself as Mr Average.

A Mr Average who just happens to be one of the hottest names around with such successes as Splash, Bigand Turner& Hoochadding millions to his bank balance. But there’s nothing average about his films.

In Splashhe met a mermaid, and in Turner &Hoochhe was a cop who solved a murder with the aid of a mad dog. Earlier this year he was offered the lead role in the film of the book, The Bonfire of TheVanities – a part other big names were going down on their Armani-clad knees begging for. His latest film, Joe Versus the Volcano, a romantic adventure out this week in which he stars with Meg Ryan

won’t do him any harm either.

He listens to this background description carefully, nodding occasionally before breaking in: “Listen, I drive around this town. I see my name in 20ft-tall lights. My face is blown up on hoardings along the freeways, and what do I tell myself? I tell myself that next week workmen will come along, dismantle the hoarding with my face on it, dump it in the back of a truck and stick up someone else.

“Then I go home and clean out the garage. I’m not saying that I’m immune to the big treatment – it’s kind of hypnotic in a way – but if you start letting any of that fuss get to you, then you are in trouble.

“You start to believe that the public will never grow tired of you, that personal happiness is some kind of God-given right. And of course, none of that is real or true. I can be unhappy and depressed. Just because I play some goofy guy in a film doesn’t mean that I don’t have my dark hours.

“I can wake up at 3am and wonder what is going on in my life. Am I a good enough father and husband? Will I ever make another film? I often suffer from crises. I don’t know whether it comes from my confused childhood. But I’m sure not going to spend the next 10 years in therapy to find out, like a lot of people I know do.”

Tom’s parents split up when he was five. Tom, his father, his elder brother and sister, became nomads, travelling around northern California in a beat-up truck. His father was an itinerant cook who had had three wives and 11 step-children by the time Tom was eight.

His mother also went on to marry three times and collect numerous step-children. Yet Tom swears that although he had three mothers and 10 homes and went to five schools, his childhood has left no scars.

“I read about myself being the victim of a broken, tragic childhood,” he says. “That’s horse shit. My childhood was wonderful. Not a Disney movie maybe, but so what? It was the perfect upbringing for an actor. It meant I could throw everything in the back of a truck and disappear for six months.”

In his early twenties he married an actress, Samantha Lewis, and had two children, a son and daughter, now aged 10 and six. That marriage ended in 1985 and three years later he married another actress, Rita Wilson.

He says: “Being at home with Rita is my idea of heaven. Just sitting around joking with friends, enjoying good food…I love it. I’d rather hit myself over the head with a hammer than go to a nightclub.

“I cannot imagine anything worse than sitting in a dark, smoky bar shouting across background music so your friends can hear you.”

Tom seems a sober, serious man, and nothing like the mischievous, boyish screen hero with the impish eyes. In Joe Versus the Volcanohe plays a man who hates everything about his life. This man, a squashed bug who exists under the heels of a hideous corporation, hears news that changes his life.

So one day he sets forth around the world on a journey that brings him to the brink of an exploding volcano. “There is a lot of Joe in me,” claims Tom. “My childhood taught me that nothing was going to change or get better unless I set off and changed things myself.

“I did just that. With $100 I drove from city to city looking for work. Even when I got into acting, I went for the jobs nobody else wanted. I had to fight for parts at the beginning. I knew I wasn’t good-looking in the classical sense.

“I’ve got a big butt and I’ve got funny hair, but what I have going for me is my resemblance to Everyman. What you see is what you get. I’m not threatening. I’m not a wife-stealer. I’m disarming. I’m a truly decent bloke – easy to get on with. Nothing gets on my nerves.

“I don’t have any goals, and I’ve only had my Tarot cards read once, so that makes me an oddball in this town.” Nor does he travel with a retinue of guards and minders, the human accessories which most of his fellow actors would not set foot outside their front door.

In fact, shortly after leaving the hotel room, Tom could be seen  walking alone along the pavement, stuffing his shirt into his trousers. He looked just as he describes himself… like Mr Average.

Except there was nothing average about the stretch limousine waiting for him a couple of yards ahead. But then even Tom can’t have everything. 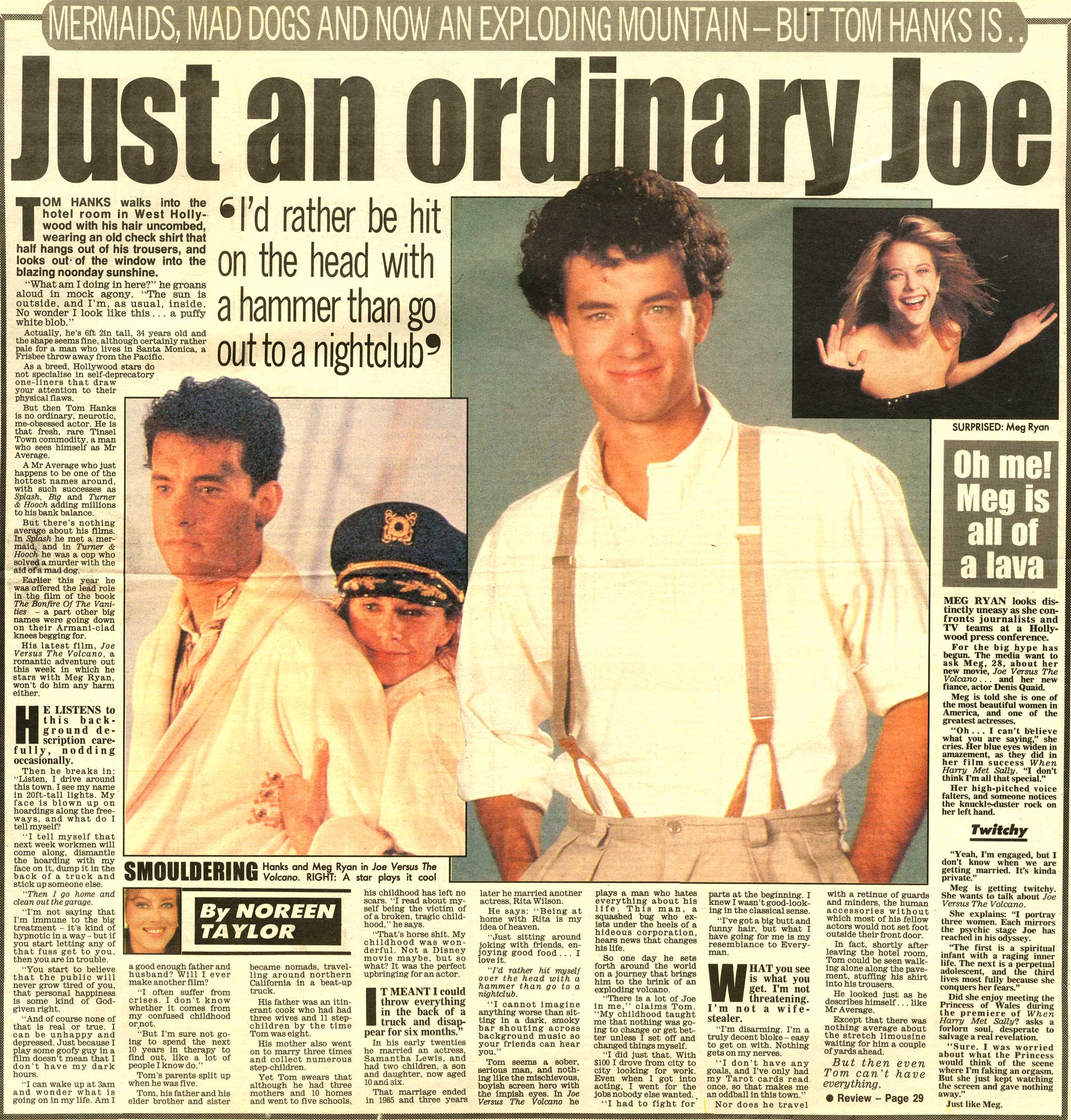