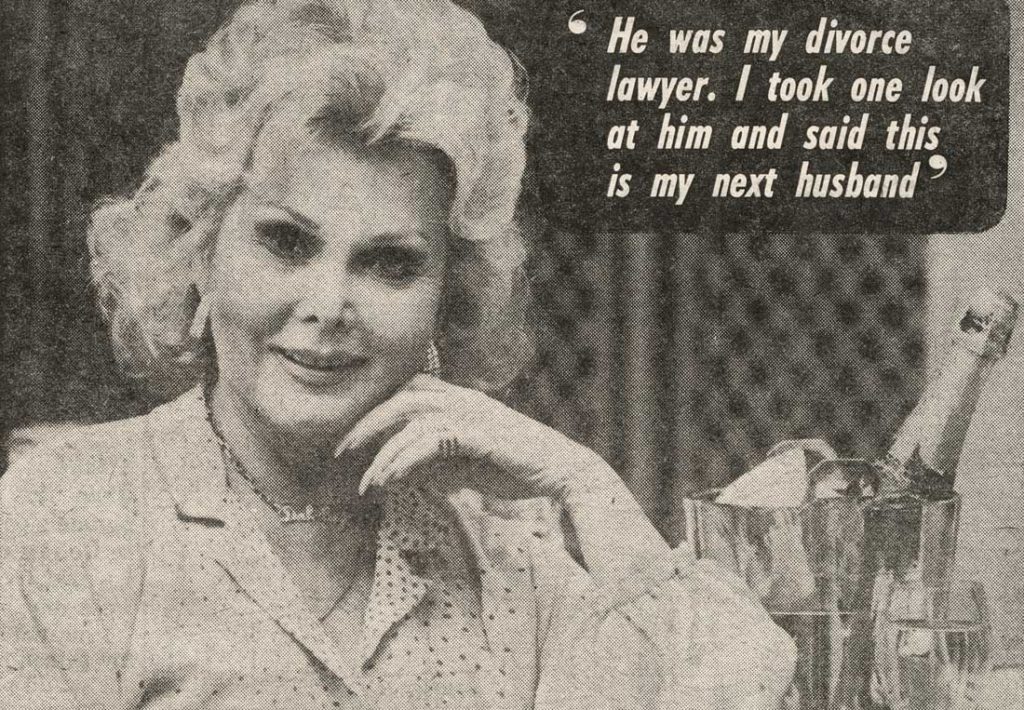 Zsa Zsa Gabor defies you to poke fun at her – by revelling in the joke herself. The lady knows she is famous for her money and men and she refuses to disappoint the customers.

She wears diamonds round her neck that spell “dahling” and flashes legs and cleavage by dressing in a scanty, thin silk number. The gorgeous hunk by her side has another number. “He’s my seventh husband,” she announces proudly.

“And he’s so violent, aren’t you, dahling? “That’s why I’m with him for four years – I love it. All the others bore me so after two years I’m off.”

The Gabor amour grunts in agreement. Lawyer Michael O’Hara, 51, just may be the last in a long line of guys who have gone ga-ga over Zsa Zsa.

The last of Hollywood’s playgirls was stopping over in London to order a new Rolls, then flying on to Germany for a television spectacular.

She is on the wrong side of fifty, but I daren’t ask how wrong.

As if she is reading my thoughts she says in her husky Hungarian accent: “I giff you one million dollars if you can prove I’ve had a facelift.” I decline, being more interested in the gems and the gents she has lifted.

Despite her forty films, three hundred TV shows, and three books, Zsa Zsa is better known for her diamond-studded divorces. “I always used to say, ‘give back the rings, but keep the stones.’ I never did. I had to work hard for all my diamonds.”

She holds out an arm dripping with sapphires. “These used to belong to some queen of England. I bought them from Anna Neagle. You can’t rely on husbands for jewels. Talking about those husbands is difficult for me, I haff such a bad memory.”

And the presence of No 7 doesn’t help. “Dahling,” she beams her dazzling smile at her latest lover, “bring the face cream and we can give a sample.” Zsa Zsa is launching a face cream to combat wrinkles.

He vanishes and she leans closer and whispers:’ “He is a grandson of the King of Yugoslavia, and he’s going to kill me. He hates me talking about the others,”

Zsa Zsa’s marriage marathon began when she was fifteen. “A Turkish diplomat, dahling, and he didn’t mean a thing. “Then there voss Conrad Hilton, with whom I had a lovely daughter. I was very young and he was sixty-four with a lot of hotels – but a nice-looking sixty-four. I couldn’t sleep with a man I had to grit my teeth and close my eyes for.

“Anyway, six weeks after I haff my daughter I go up to George Sanders and tell him that I am mad for him. The same evening he is mine. After George, there voss a charming man who covered me with diamonds and bored the life out of me.

“To get out of that one I married Jack Ryan, the Texas genius who invented the Barbie Doll, He voss 100 per cent nuts. Then… just mistakes until I met this one. He voss my divorce lawyer. I took one look at him and I said this is my next husband.

“On the day my divorce came through we went to Las Vegas and got married. They alvays want to marry me. Point out a man, and I tell you in three weeks he’s going to propose to me. “I’m very rich, I cook and I let them boss me around.

Husband No 7 returns bearing the Zsa Zsa anti-wrinkle formula, so we switch the conversation. “I’m mad for Margaret Thatcher. Background and education mean so much. I haff it, but most of the actresses I knew didn’t. In America they love me than anything in the world, even with my big mouth.”

And off she wiggles, proving that old Gabor girls never die – they just grow more outrageous. 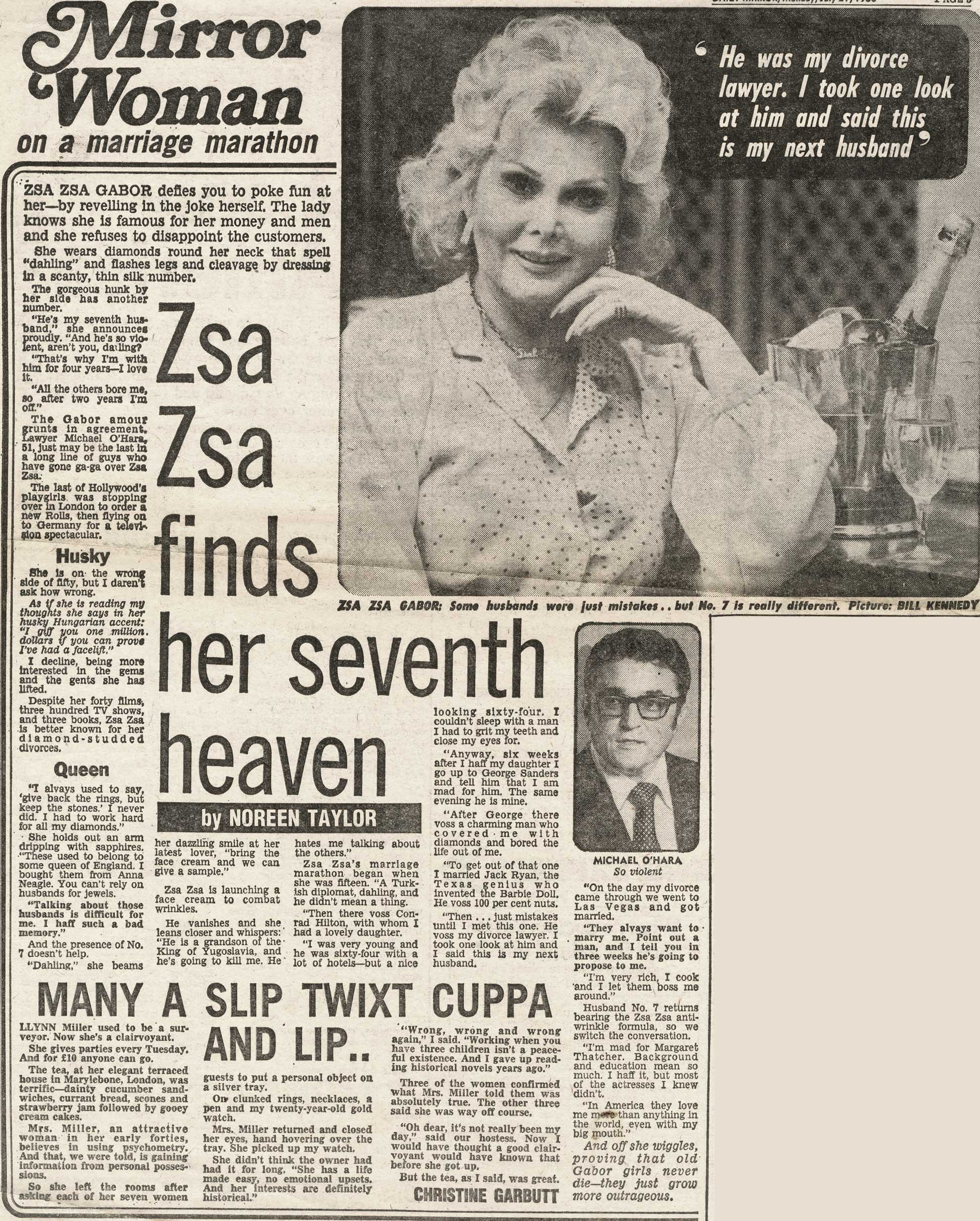